Delta won the Jeffersonville Invitational last weekend, the first time the Eagles had done so since 2006. The meet featured seven teams that finished the 2017 season atop the poll. The Eagles finished with 36 points to edge defending state runner-up Jasper, who had 34.

Mt. Vernon began the year 2-0, with victories over Shenandoah and Franklin Central. No. 3 singles Sam McCarty helped lead the way, losing only four games in his first singles match in his second year of tennis.

Fox shot a one-under par 71 to win the individual championship at the Connersville Invitaitonal. She won by a five-shot margin on a tough course.

Bennett shot an 84 to win the Delaware County individual championship.

Runners of the Week

Mitsch, a junior, finished second at the Delaware County Clash at the Muncie Sportsplex, running a personal-best 17:08 in tough conditions.

Shaw ran 16:03 over 4K to finish third in the freshman/sophomore race at the Zionsville Invitational to open the season. She had the 11th-fastest overall time at the event, which features several top programs.

Drew Austin was sixth to lead New Palestine to a fourth-place finish in the junior/senior race at the Zionsville Invitational. He had the 11th-fastest overall time at the event.

Elizabeth Reece was runner-up at the Delaware County Clash at the Muncie Sportsplex, running 21:54. 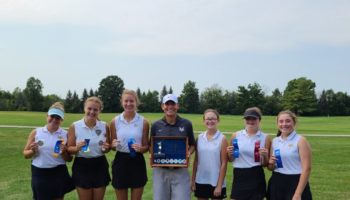